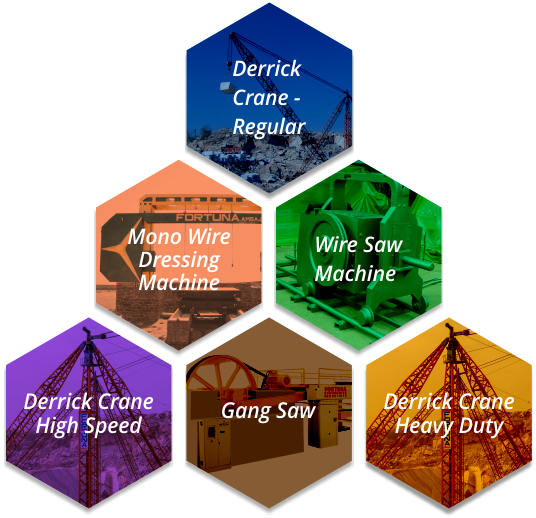 Fortuna: the Goddess of fortune. In its right perspective, it forms the mainstay of the company where plenty of chances have been incorporated to produce unusual results. A company that happened by chance was then designed to leave its mark on time. The basic need to get to the root of the matter has led to a marble mining company producing its own basic equipment.

The necessity of having technically sound and yet economically viable machines led to the design and fabrication of machines tailored to suit individual conditions. Machines that have been tried, tested and modified to perfection. Machines that deliver much more than they promise. Machines that are work of art in themselves. Machines that go through rigorous tests and prefabrication standardization.

Fortuna Engineering Industries was officially incorporated much later in 1991. In actuality the infrastructure work was already happening at the marble mines of its parent concern Hindustan Marble Pvt. Ltd. the challenge of scientifically extracting sound material without disturbing natural surroundings in a detrimental way was a challenge afforded by sheer chance.

The main work force was exposed to innovative means and technologies. Education opened up new avenues. Geographical barrier no longer existed for the exchange of technology. Time was flowing with progress as its motivation. One thing led to another and today we are proud caretakers of the opportunities we have been provided with.

Fortuna : A dream that has taken on realistic dimensions; where man and machine enhance productivity. Indianisation is synonymous with indigenous and innovation. Where the machine is an extension of what man can accomplish.